Photo from an earlier event.

The coincidences don’t stop there. The Borderline bar is frequented by survivors of last year’s Las Vegas Harvest country music Festival shooting, 50-60 of whom were also present at the Borderline Bar shooting. As Natalie Dreier reports:

A group of people at the Borderline Bar and Grill in Thousand Oaks, California narrowly escaped with their lives for a second time. Nicholas Champion said he and many others at the bar where 12 people were killed had also been at the Las Vegas Route 91 Harvest music festival last October. That is where 58 people were killed in a shooting, CBS News reported. (Thousand Oaks Shooting: Survivors of Las Vegas Shooting were at California Bar Shooting, November 8, 2018) 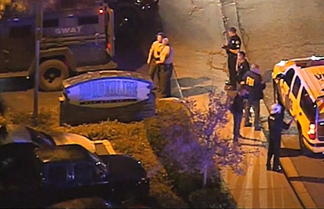 The bar, which was hosting “College Country Night”, had attracted the group of  Harvest country night survivors. It seems unlikely that it is really a coincidence that this is when the shooter showed up, particularly with all the other coincidences described in this post surrounding the event. And if not a coincidence, then in what way were the Harvest country night shooting survivors being programmed by this second event? What is the public supposed to think? After the Harvest event survivors escaped that first event, perhaps they thought they were fortunate and could go back to their lives. But what now? Are they/we to believe that there is no escape from this violence? Are they/we to believe that our once prosperous and secure American way of life is now to be splintered and torn apart by a firestorm of pent up rage?

The coincidences don’t stop there. The name of the bar is a reference to a border, and we have a caravan of some 20,000 migrants approaching the U.S. border ostensibly seeking asylum. Like the Borderline Bar shooting, the timing of the event coincides with the mid-term elections. The caravan is obviously orchestrated and promoted by social advocacy groups, which are funded by shadowy figures, George Soros infamously named among them. The intent of the caravan seems to be that penetration of or trouble at the border will activate a storm of protest within the United States that will destabilize the status quo.

The coincidences don’t stop there. On November 11 (this is an eleven day) the day following the Borderline bar shooting, the “Hill” forest fire ignited about five miles northwest of the bar and proceeded to threaten the ordered and peaceful life of numerous communities as it proceeded southward to cross route 101. Route 101 held briefly as an east-west running border, before the fire jumped it between Camarillo Springs and the Casa Conejo and continued south.

Meanwhile, the much larger Woolsey fire jumped route 101 about 5 miles east of Thousand Oaks between Agoura and Saratoga Ranch. Symbolically speaking, these two fires could be thought of as ignited by the gunshots at the Borderline bar. Then, as they moved from the north of Thousand Oaks southward and crossed the 101 border to its west and east, the town was symbolically engulfed in flames as the border was probed and then breached.

The symbolic message is that the American people can not escape seeing their community life engulfed in a firestorm of destructive violence.

The confluence of disasters we have just witnessed in the Thousand Oaks area is not random. This is ritual sacrifice. It is intended to ensure the success of soon-coming efforts to destabilize America. It is time, in the view of the shadowy oligarchy that considers it their prerogative to steer nations, societies, and cultures from behind the scenes, that their back room and subversive manipulations come to fruition in the birthing of a new nation. This oligarchy is dominated by occultists. They use ritual sacrifice to bind the discarnate entities they believe in to ensure the success of their endeavors.

The time for these things to remain hidden is ending, and many things that have been hidden will be revealed. The Trump political phenomenon is partly what is bringing this to birth. Trump represents the awakening of the American public to the subversive nature of the Left: the mainstream media and the “Deep State” structure that it works with. The Left is no longer able to contain this awakening by subterfuge and camouflaged subtlety as they have for so many years. It can not win the hearts and minds of the American people – neither by argumentation, nor by spin – and it must now either die or resort to force. It will resort to force. The Borderline bar shooting, the fires, and the caravan are tools they are using to kick off this end run. Mainstream America will probably win this battle, and the Trump administration will triumph. But the America that emerges with this triumph will be different than what has been in the past.

And the coincidences don’t stop there. California has long been subject to and a source of programming by the social engineers serving the oligarchy. They have been used as change-agents to re-engineer American culture during the entire life of the film and broadcasting industry. In the 1960s, the CIA and MI6 successfully engineered a social and cultural revolution largely through the music industry and the introduction of psychedelic drugs.

In America, Laurel Canyon was a primary incubator for this culture. Laurel canyon was not involved in the above shooting or the wildfires. It is located just outside of Hollywood, maybe 25 miles east of Thousand Oaks along route 101. But the Hollywood studios and entertainment industry is alluded to through the destruction of one of its stage sets – one that is iconic of the whole epoch of modern American film-making for movies and television. The Hollywood industry is central to the era of subliminal programming that is now coming to an end. This is not to say that subliminal programming, and its evil big brothers, trauma-based mind control and brainwave entrainment by wireless transmission, will cease. But whereas the little brother -Hollywood subliminal programming through entertainment – will no longer be such a dominant carrier of the flag. It will become a minor player.

The era of Hollywood’s spell-casting deception is ending. When an energy is in play, the occultists attempt to anchor it through geomancy, symbol, and ritual; and Hollywood icons and iconic stage-sets do this. It is symbolically and ritually significant, then, that the historic “Western Town” stage-set at Paramount Ranch was burned down in the Woolsey fire.

Ritually, the destruction of iconic facilities used to cast this cultural spell over the United States releases the energies that were pinned there so that a new era can emerge. As this transition begins, the occult oligarchy are using sacrifices such as the Borderline Bar shooting, the California firestorms, and the caravan approaching the U.S. Mexico border to ensure successful emergence of this new phase.

In case the reader finds this a lot to take in, or a wild stretch of the imagination, some background reading is offered below:

And of course there’s more. Use the search box to search the blog. Thanks for visiting!